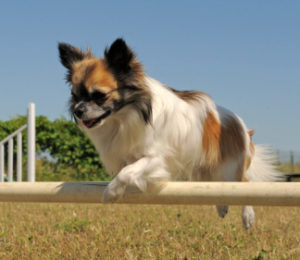 This is the stage where we expect the dog to respond appropriately to our cues.

It is also the point at which traditional trainers used to begin training a new skill.

Using these old methods, the dog did not at first understand what was required.

He would need to be guided, or manipulated into position,  and would hear the new word for the first time during this process.

Dogs being trained the modern way have an easier time at Stage Three.

By working through the first two stages in dog training before you begin Stage Three,  you should have a dog that already knows how to carry out the behaviour you are looking for (Stage One), and understands the meaning of the word that you have attached to this behaviour (Stage Two).

This applies as much to standard obedience commands like ‘sit’ as it does to contrived behaviours like ‘waving a paw’, ‘pressing a switch’, or jumping over a rail.

Preparing for Stage Three dog training in this way, is essential for those that wish to train with a minimum of corrections.

At Stage Three,  instead of using the cue word ‘Come’  whilst the dog is running towards us,  we begin to use the cue word as a signal,  to tell the dog what we want him to do, whilst he is actually doing something else.

The same applies to any other cue,  and for any other desired behaviour.

When to use the cue

Of course, it would be very easy to use this cue when the dog is unlikely to give the correct response.We could say ‘come’ when the dog is playing with another dog for example.   But we don’t do this.

We give the cue word in such a way, and at such a time,  that it is very difficult for him to fail.

For example,  we call the dog ‘Come’  when we know that he is hungry,  and bored, and has nothing better to do then come and see what we want.

This then gives us a chance to reward him for the desired behaviour.

It is vital that rewards at Stage Three are big enough to strongly reinforce the behaviour.   In many dogs,  giving the dog a little pat will not reinforce a recall for example.   You can find out more about using rewards successfully in this article: Effective use of rewards

Stage three dog training is all about establishing a response to your cues at a basic and undemanding level.   It is not about teaching a dog to obey you in all circumstances.  That comes next at Stage Four.

Get Stage Three right first,  before you move on,  and ensure the foundations you lay are solid.