You are here: Home / Glossary / Dog training language: what is extinction? 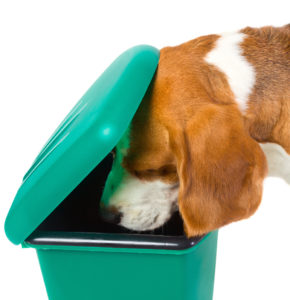 Once you get involved in dog training, you are bound to hear the word ‘extinction’ bandied about.

In this article we take a look at the process of extinction.

At what it is, and how it can help you train your dog.

And no, it has nothing at all to do with dinosaurs

When an animal interacts with its environment, in any way at all, there are three possible outcomes.

Provided that these outcomes are closely associated in time with the animal’s behaviour, they directly influence the likelihood of the dog repeating the behaviour that caused them.

Extinction is the slow death of a behaviour in response to the absence of change, the third of our outcomes.  Let’s take a closer look at those three outcomes in turn

Change for the better

If the dog breaks into the bin when no-one is around, and gets the remains of the Sunday roast for his troubles,  his day just got better.Bin busting worked out pretty well for the dog.

Of course, when the owner arrived home and discovered the contents of the bin all over the kitchen floor, the dog may well have got a smack.

But remember our proviso?  The outcome or consequence of the dog’s actions must be closely associated in time with the animal’s behaviour in order to influence the likelihood of that behaviour being repeated in the future.

We are talking seconds here.  Not minutes, and certainly not hours.

Next time his owner goes out, the dog will bust into the bin again.  Because bin busting worked for him.

Change for the worse

Suppose however, the owner of the dog catches him trying to bust into the bin.

Caught in the act!

The owner then smacks the dog.   The dog’s day just got worse.  He doesn’t get his roast reward, and even received a punishment.  Job done.

Well no, unfortunately, it isn’t.  One of the problems with punishing dogs, is their poor ability to generalise.   The dog just learned not to bin bust in front of his owner.  He did not however, learn not to bin bust in an empty house.

If a dog is smacked for trying to get into a bin, he won’t try again in front of the person that smacked him.

The next time the owner goes out….   Well, you know what happens next.

In the final scenario, the owner buys a dog-proof bin.   The dog tries pretty hard to get into the bin at first.  But fails.  He tries a few more times, and fails each time.

If your dog tries to get into a dog proof rubbish bin and fails, there is no change.  He gains nothing.  After a few attempts, he will give up.

Dogs do what works for them

Animals are persistent.  They will try several times, especially if a behaviour has been successful for them in the past.  But no animal is silly enough to keep persisting in behaviours that are repeatedly unfruitful.

After all, in the natural world such behaviour would result in the animal’s swift demise.

So dogs do what works for them.  They only persist with behaviours that have beneficial consequences.

In dog training, we can use this knowledge to create rewarding consequences with which to develop and establish desirable behaviours.  But we can also use the power of ‘no change’ to help us in our training endeavours.

The power of NO Change

When the outcome of a dog’s behaviour is ‘no change’ the dog is less likely to repeat that behaviour in the future.  If this happens repeatedly, the dog will eventually cease the behaviour altogether .  Just like behaviour that is repeatedly punished.

We call this process ‘extinction’ because the behaviour literally dies out due to lack of beneficial consequences.  And we can use it to help get rid of unwanted behaviours.

You might not think that extinction can be as powerful as punishment.  But it often is.  Simply because both extinction and punishment result in no benefit to the dog.

In addition, extinction has the benefit of avoiding the downside of punishment that can interfere with and hinder the training process.

We do need to bear in mind though, that in dog training, extinction can work both for us, and against us.

When extinction works for us

Provided we ensure that there is no consequence to undesirable behaviours, like jumping up, begging at the table and so on.  They will eventually die out.

The tricky part is ensuring that there are genuinely no consequences.  Because sometimes a beneficial consequence can be quite subtle and easy to miss.   We may need to take active steps to ensure that extinction can take place.

Often, in positive reinforcement training, especially in the early stages, a training line will be used to prevent the dog helping himself to rewarding behaviours.

And of course, we can hasten the training process by teaching the dog an alternative and more desirable behaviour.  But the process of extinction is still a very useful one.

When extinction works against us

Extinction can work against us too.   The most common way in which this occurs is when people either deliberately, or accidentally stop rewarding a good behaviour, like coming to the whistle.

Animals repeat actions or behaviours that benefit them.  Just like us.

This makes perfect sense in a world where resources including the energy powered by the food the animal eats, are limited or even scarce.  There is no point in banging your head on a brick wall.

So, if something does not involve a change for the better, your dog will be less likely to repeat the behaviour that resulted in that outcome, in the future.

You can use this knowledge to prevent him gaining access to rewards when his behaviour is not appropriate.  And to prevent yourself reducing the rewards so much that your hard earned obedience training slips down the drain.

If you learn how to use rewards and restraints effectively and you are on the road to becoming a very effective trainer.

Can you think of an example of where extinction has worked for or against you?  Do you find it difficult to extinguish unwanted behaviours in this way?  Share your thoughts in the comments box below.