You are here: Home / Training Tips & Guides / Training tips: 6 ways to set your dog up to win 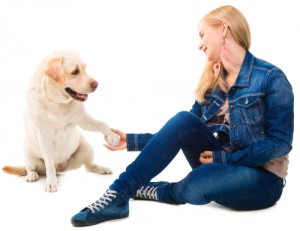 With you determined to teach your dog NOT to do this or that.

And your dog determined not to get caught and punished.

If your dog ignores you despite knowing what you want, somewhere along the line, the two of you have got lost.

If you spend a lot of time trying to teach your dog NOT to dog things,  this post is for you.

Here are six rules to help you

Rule 1   DO rather than DO NOT

For example, from your point of view, the best choice for a dog that wants to go through a door, is usually to sit by the door and wait.There are often many bad choices of behaviour in the same situation.

What do you want him to do when you blow your whistle, say his name, open a door, fetch his lead?  Check out this article for more information

Asking a dog to sit and stay for ten seconds is very achievable.  Most quite small puppies can learn this in a matter of days.

Asking a dog to sit and stay for two minutes, and to remain sitting whilst other dogs run past or whilst visitors come through the front door, is the biggest leap imaginable for the dog.

Yes this kind of leap is what many dogs are subjected to every day of their lives.

They are set up to fail, and then chastised for or labelled as wilful or naughty when they predictably cannot pass an impossible test.

Break your dog training into baby steps, so that your dog can succeed, every time.

As you make a skill more challenging, mix some easy moves in with the hard.   So if you are trying to move from a 1 minute down to a three minute down,  mix some five second downs in between.

Help your dog feel clever, successful, brilliant. Let him bask in your approval.  And remember that success breeds success

This doesn’t mean you have to offer your dog a selection of different rewards after each successful behaviour.

We have all been there, someone gives you a gift which you know is something they have wanted for themselves for ages.  They have given it to you because they really like it, they think you will too.  But actually you don’t like it at all.

We do this to dogs all the time.

“What a clever dog!” we say, as we pat him furiously, and give him a big cuddle.  Assuming that this is what the dog really likes receiving, because we really like giving and receiving cuddles ourselves.

It is easy to make assumptions about what your dog likes.  And if you want a cuddle, that’s fine.  But if you want to get your dog trained without content recourse to punishment, you need effective rewards and that usually means food, or exciting activities (like chasing a ball or playing tug)

If your dog makes a mistake, breaks from a down, refuses a recall, or any other cue.  Take a step back.

Don’t just ‘try the same thing again’.  Make sure that he cannot rehearse the same error again and again.

You can do this by reducing his options in some way.  Long lines, restricted areas, training set ups where your assistants have been primed to behave in a specific way, all help make sure your dog doesn’t rehearse his mistakes.

Don’t give commands your dog stands little chance of obeying  Get plenty of successes under his belt before trying something more challenging in the future.

Some training battles are hard to win.  Some are impossible.

Pick your battles carefully.  Don’t  try and teach behaviours that the dog isn’t ready for, or that he has to obey in your absence.

People often ask me how to stop their dog raiding the bin and tipping the contents all over the floor whilst they are out.

It seems very trite, but in all honesty this is a pointless battle.  Put the bin in another room or get a lockable bin.

There is a whole world of fun things you can teach a dog.  Why get hung up on something you have no control of whilst you are not in the house with the dog.

The truth is, dog training should never be a battle, and if you are clever, you can avoid battles with your dog entirely.

Rule 6  Don’t be in a hurry to fade rewards

People often secretly feel embarrassed or ashamed of using food rewards. Even though they are using food correctly to ‘reinforce’ behaviours, and not simply bribing the dog to comply.

We are usually in a terrible hurry to get past that ‘food’ stage and move on to being able to control our dogs with just a pat and a kind word.

But here’s the thing

Studies have shown that when you stop offering valued rewards, behaviours become unreliable and eventually die out.  And when the rate of rewards falls below 50%, behaviours become less reliable.  Would you go to work if you got paid less than one week in two?  Probably not.

Replacing food with alternative rewards is ok, as long as those rewards are valuable to the dog.  Some dogs are desperate for praise and affection.  Others not so much.

Using praise and affection as a reward is OK so long as you are aware that most such alternatives are less valuable to the dog, and therefore you need to be alert for signs of the behaviour becoming unstable

Rewarding your dog is not something to be ashamed of, and as more and more people are learning to train with positive reinforcement, the use of food will become less significant, less of a talking point.

In the meantime, there are other rewards that most dogs value, and that you can use if it makes you feel more comfortable  – toys and games for example.

But don’t be in too much of a hurry to lose those rewards altogether.

What is your favourite way to set your dog up to win?  Share in the comments box below!

If you enjoy Pippa’s articles, you will love her new book: The Happy Puppy Handbook

– a definitive guide to early puppy care and training.