You are here: Home / Reviews / Best Tug Toys For Dogs 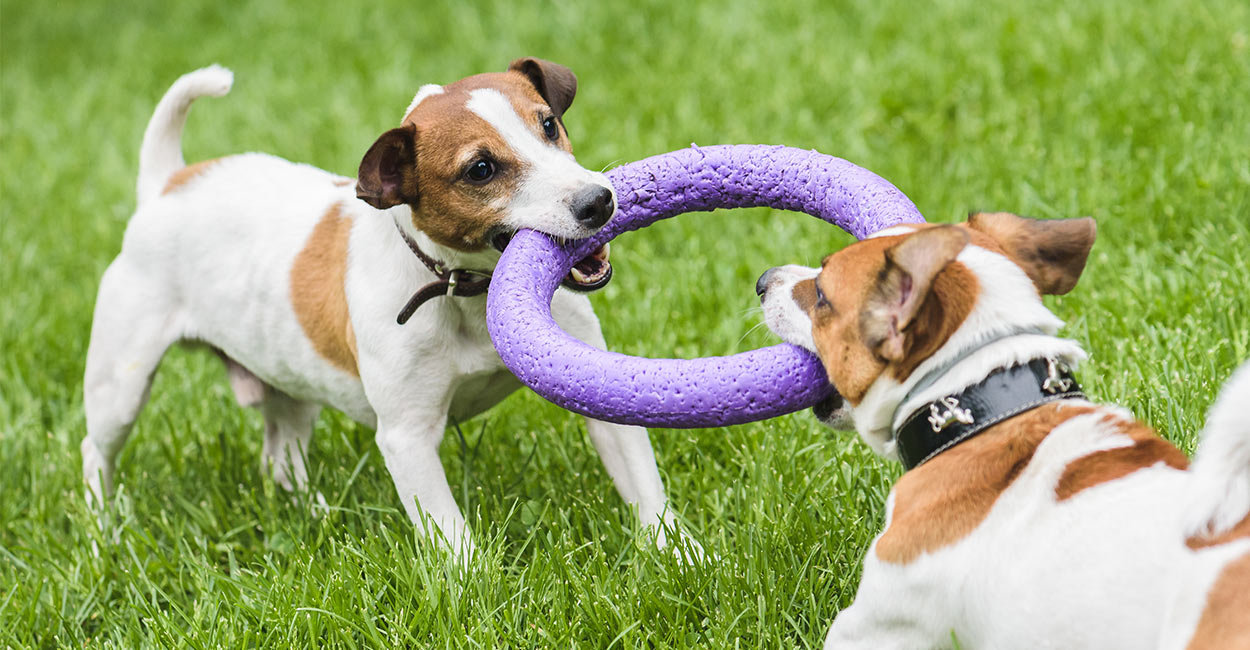 Welcome To Our Guide To The Best Tug Toys For Dogs!

Whether You Are Looking For Small Or Large Options, There Are Some Great Choices Available.

From Rope To Rubber, And Even Those Designed To Be Indestructible!

So What Are We Waiting For? Let’s Check Out The Best Tug Toys For Dogs.

There’s only one thing your dog loves more than playing, and that’s playing with you!

Tug toys are a brilliant choice because they often give your pup both options.

Keeping him happy and well exercised for hours.

But how do you pick the best tug toys for dogs?

What are the best tug toys for dogs?

Different dogs have different needs when it comes to toys.

Some dogs can tear toys apart a lot more quickly than others. Others prefer to hang on to a loop, or other easy to hold handle. 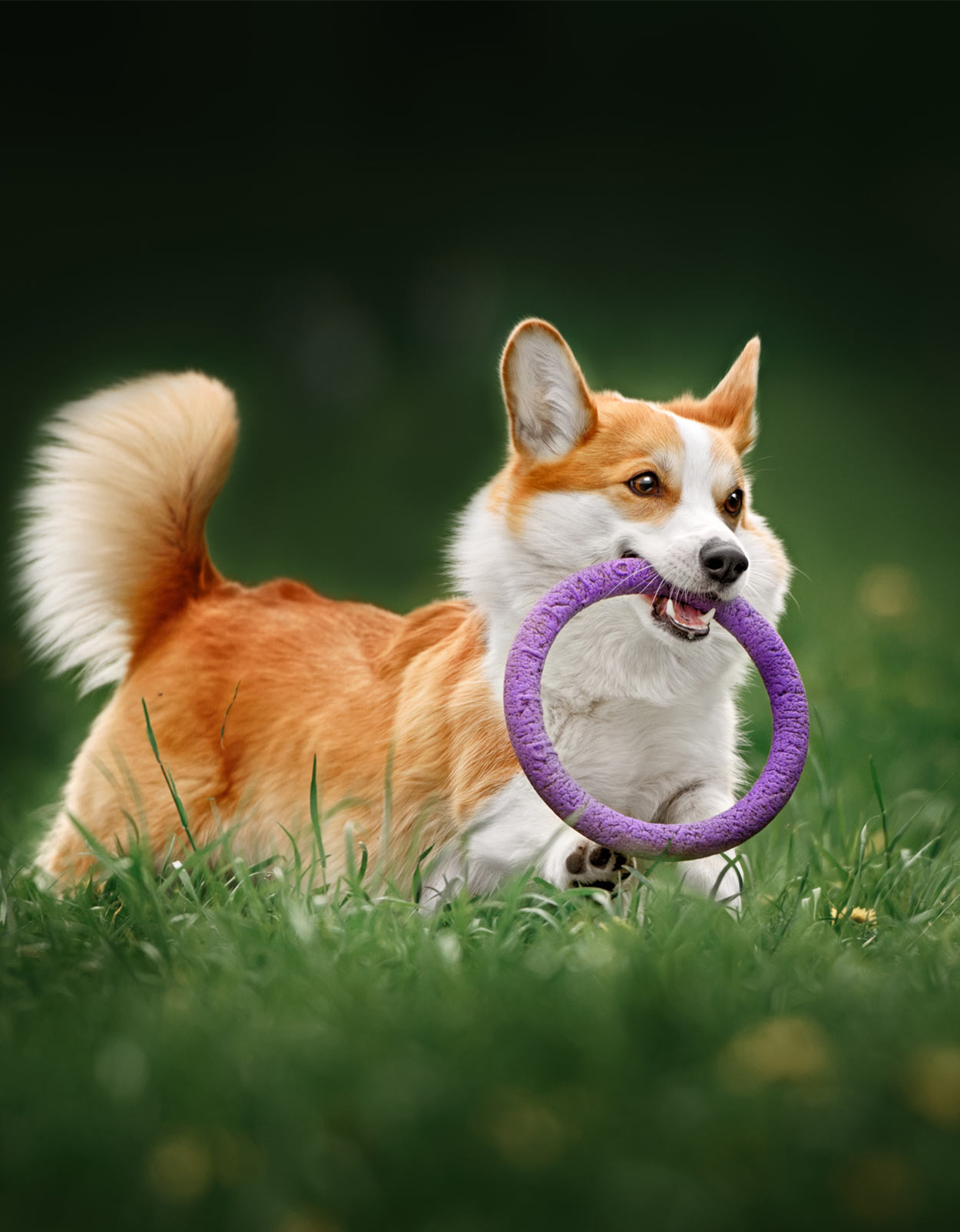 To make the choice a bit easier, we have divided our list of tug toys into sections.

Let’s take a look at some great options when it comes to the best tug toys for dogs of every type!

For strong dogs, you may need a more tough tugging dog toy.

Many dogs take their natural prey instinct out on their toys, and can be quite rough.

So you need a strong toy to match your strong dog.

When it comes to tough tug toys for dogs, there’s no brand as recognizable as Kong.

This Kong tug toy has a comfortable handle, and stretchable rubber for the more intense play sessions.

It’s a great choice of durable toys for your hard playing dog.

If your dog chews everything apart in mere hours, you need an indestructible tug toy.

That’s where a Kong Extreme tyre toy comes in.

The Extreme line is made of ultra durable rubber that is designed for intense play.

Kong tire toys are a great bonding toy with your larger dog.

Most reviewers say that it holds up to aggressive chewing, and the rubber is pliable enough to be comfortable on their teeth.

If you’re looking for larger and thicker breeds, like German Shepherd or Pitbull tug toys, look for something with some length.

Larger and stockier dogs tend to have powerful jaws, and it’s a good idea to have some space between them and your hand if they get over excited.

Tug toys with handles are a safe choice that will make playing with your dog enjoyable for both of you.

This Chuckit toy has a natural rubber ball with a long handle for tugging.

It can also serve as a chew toy, a throwing toy and works in medium ball launchers as well.

Another very popular toy is the GoughNuts Tug Toy.

Their main priority is both safety and fun for your large dog.

So they created a highly durable product that keeps your hands separate from your dog’s jaws.

Rope tug toys for dogs are a classic choice.

Sturdy braided ropes made of durable cotton help to exercise your dog while also cleaning their teeth.

While some larger dogs can unravel a rope tug toy, there are sturdy ones on the market that can withstand a lot of play.

This rope toy has great reviews, with most large dog owners saying it holds up well.

A tug ball dog toy is another style of rope toy for your dog to enjoy.

It gives them a ball to grasp when they’re tugging, which reduces wear on the rope when larger dogs play.

This toy is another great choice, and you can put treats in the balls for your dog.

If your dog needs more play time than your human arms can handle, there is an option for that too.

Designed for your pet’s safety, the bungee won’t over stretch or snap, and you can adjust it to fit your dog’s size.

S-shaped tug toys are a great option for small dogs.

The design makes play time with owners and other dogs easy and enjoyable, and less susceptible to crowding or aggression.

This West Paw Bumi toy can extend to twice its length when your dog pulls on it.

And it won’t lose its shape!

The Bumi is a strong toy that can withstand avid chewers, and it even bounces.

Small dogs are higher energy than their size lets on.

So when they play, they need an interactive toy that engages them.

The Achivy Dog Rope is another great option when it comes to finding the best tug toys for dogs.

It’s a great rope tug toy that allows them to play with their owners or other dogs.

It also serves as a chew toy and a treat dispenser.

Tug toys for small dogs are also perfect for your puppy.

Look for toys that will help with your puppy’s teething, and sensitive material for their gums.

Since your puppy isn’t big enough to be a hard chewer, you don’t have to be as concerned about the toys getting destroyed.

This tug toy with a handle is a great choice for puppies to learn to play and grow into their play habits.

It’s helpful for teething and will help expend that puppy energy.

Playing with the best tug toys for dogs

Once you have chosen your top tug toy, then there are a few good groundrules to follow for co-operative play.

Tugging is a natural activity for dogs, and is a great way to expend energy.

While it may be tempting to get a tether tug dog toy and let your pup tucker itself out, tug toys can be a great way to play and bond with your dog too.

But i’s important to remember that when you play a game like tug-a-war with a dog, there must be boundaries.

If their tail is wagging, your dog is having fun. But don’t let them get overly excited!

Your dog’s hunting instinct may cause them to growl.

This isn’t cause for concern unless their body language becomes aggressive.

If they start using their teeth, make sure to end play immediately.

Once your dog learns boundaries and rules, tug toys can be great fun for you both!

Choosing the right tug toy for your dog will largely be a matter of your pup’s preference.

Know how your dog likes to play, and the style of toys that they enjoy.

And that it is sturdy enough to stand up to their method of playing.

But more than anything, make sure you both have fun!